So it would be a Day 0 on the ‘ol Partly Calendar. Stop in the morning and leave in the evening, so it’s just a travel day. I get confused sometimes, but it’s okay, I made up that 0.x system. Maybe Brother Dan is right. Maybe.

This morning is wonder-filled. It’s dark as we enter the port and we can see the outline of the Rock of Gibraltar looming from the sea. 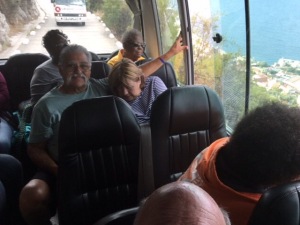 We don’t have a clue just how cool this place is. The city, the history and the Rock. Mysteries abound. But we are on our way to check it out.

Our tour was put together for us by some of Pat’s friends on Cruise Critic, so all we had to do is be at the right place at the right time. 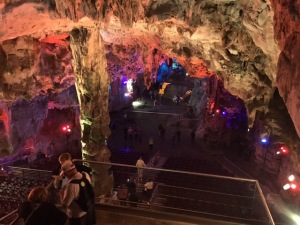 That’s good for me. I get lost pretty easy. Of course I see a lot more things than most people do on tours and so far have not gotten arrested for opening the closed doors. We found some people we knew and were lead to the right place and jumped up on our bus, found our seats and settled in. Pete and Iva were a couple of rows behind us, so we were ready for the day.

We headed out of the port area and traveled through the City of Gibraltar. If you remember, from an earlier post, Iva is afraid of heights. So we didn’t tell her that we were going to drive this 24 passenger bus up the side of the Rock of Gibraltar. So we enjoyed riding around the city, by the boarder, the sea and across the airport. That’s right, across. It seems that instead of building a tunnel for the cars and foot traffic, they just built a road across the runway. Then when a plane comes in to land, they stop the foot and car traffic, let the plane land then continue to let the cars and people travel across the runway to caontine their journey. OSHA would have fun with this one.

We also went to our first stop to get a nice view of the Atlantic and the Straights of Gibraltar as well as the Mediterranean Sea all standing in one spot. What a view.

Once back on the bus, we started the real climb up the Rock. Very narrow roads with switchbacks had Iva’s head down and she was facing her fears, again. We always remind her that what goes up must come down. She did great. I think she’s getting used to this way of travel. Maybe not. You’ll have to ask her.

As we got a bit higher, there was a bus traffic jam. Monkey’s. Yep, they’re famous for being here. They seem to be pretty well calm and very comfortable with people. We like monkeys. One of them used Pat’s shoulder as a springboard to jump from one bus roof to another. That caught her by surprise. It was quite a site and a good stop to use the head.

Our next stop along this road was a place where we could go into the caves of the Rock of Gibraltar. I really didn’t know that they had “Caves.” I thought they just had tunnels from for the old military. Nope. These are real caves. In the main cave, they have put about 100 chairs and do concerts in the cave itself. Now that would be pretty cool to listen to. It was quite a site with blinking lights set to music. It did make it a little hard to watch your step at times with the shadows moving to the music, but it was quite a display. Just like the 60’s and 70’s I think I remember those same shadows and colors.

After the cave stop, we continued up the Rock to the tunnels. Pete and I took the 300 meter steep walk to the top to poke around in the tunnels. We made it just fine and had some great views at the same time. Once back down the hill, Pete said he was going to use the restroom before getting on the bus. He came back and told me that they were at the top of the hill. He decided to wait for the next stop. Good move Pete.

On the way back we got some great views of the City of Gibraltar and the port where there was this little cruise ship. Yep, that’s our home and she is doing just fine taking very good care of us all. Thanks Vista. We love you too.

Once back to almost sea level, we drove around the City and saw some amazing streets and buildings and a ton of construction. It seems like they are upgrading everything. We’ll have to come back and see what they’ve done to the City in a few years. Kind of like Fort Myers Beach. We’ll just have to wait and see.

So back into the real World, so to speak. A quick stop at the Duty Free shop and found a large bottle of Absolute Vodka for 10 euro and we were set for the trip across the Atlantic. Yep. This is where we leave the mainland and head to the Azores. They are about 3oo miles west of here. It will take us two days to get there, and the weather is promising to deterate with 20 foot seas and 45 knot winds. Let’s begin the shake down cruise.

Next stop, the Azores…

This site uses Akismet to reduce spam. Learn how your comment data is processed.